More than 15 percent of Latinos smoke.

The United States has aggressively tried to reduce the popularity of smoking. The government has restricted where people smoke; it has depicted the health consequences in graphic media campaigns; and it has increased cigarette taxes. Despite all those efforts, Latinos have not been deterred from smoking, especially young Latinos. More than 15 percent of Latinos smoke, raising their risk of coronary heart disease, stroke and lung cancer in the process.

During the past decade, the percentage of Latino high school students who classify themselves as heavy smokers (11 or more cigs a day) has doubled. While researchers think this trend may have something to do with assimilation, they aren’t exactly sure what’s causing the increase. What they do know is that smoking, even a little bit, still has significant health risks. Remember, it’s never too late to quit smoking. 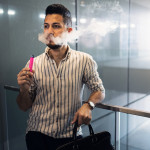