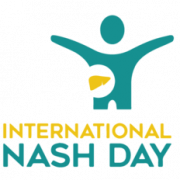 International NASH Day (IND) is a public education campaign launched in June 2018 to raise visibility and urgency around fatty liver disease and its more advanced form, nonalcoholic steatohepatitis (NASH), which affects more than 115 million people around the world.

Nonalcoholic steatohepatitis (NASH) is a hidden epidemic. It is the progressive form of Nonalcoholic fatty liver disease (NAFLD), and affects more than 115 million people worldwide. An estimated 357 million people will be affected by 2030. Because NASH symptoms are often not overt, NASH is often underdiagnosed and underreported. NAFLD and NASH are major risk factors for concurrent conditions: more than 70% of patients are obese, up to 75% have type 2 diabetes, and anywhere from 20-80% have hyperlipidemia. Unchecked, NASH may lead to cirrhosis, liver cancer, and liver transplant.

Against this backdrop, the first International NASH Day was launched on June 12, 2018, with the goal of raising awareness about NASH and the actions people can take to prevent the disease. In 2021, International NASH Day was held on June 10, under the leadership of Global Liver Institute, gathering together more than 120 partners worldwide and successfully launching events and screenings, briefings, media outreach, and social media campaigns globally. Now entering its fifth year, we invite you to join us again as we mobilize our collective efforts to #StopNASHNow!