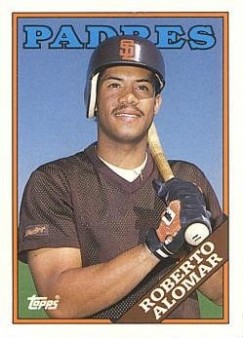 Is former second baseman Roberto Alomar HIV positive? If so, did he hide his status to engage in unprotected sex with his wife? Yes or no, congratulations are still in order for becoming the newest member of the Major League Baseball Hall of Fame. He was elected to the Hall of Fame after being picked on a whopping 90 percent of the ballots (75 percent is needed to get elected).

He was a 12-time All-Star, won a record 10 Gold Gloves at second base, hit .300 and helped the Toronto Blue Jays win titles in 1992-93. ESPN also called him smart, graceful and acrobatic on the field.

All of the stories about Alomar’s induction also cover the players who didn’t get in this year because of their ties to the “Steroid Era.” These are the players with big numbers and even bigger muscles.

“We are asked to consider character when casting Hall of Fame votes, and I don’t believe those who used performance-enhancing substances meet that standard,” Susan Slusser of the San Francisco Chronicle said in an e-mail to ESPN.

The only blemish mentioned on Alomar’s record? He had an incident in 1996 where he spit on umpire John Hirschbeck. It received a lot of play in the media at the time and was amicably settled in a very public display early the following baseball season.

What is missing from most of the reports I’ve read so far is any mention of his more recent problems. The one where his wife accused him of hiding his HIV status in order to have unprotected sex with her.

Nothing has been proved when it comes to the case. But as Yahoo! contributor Ron Hart wrote: “The facts include that Alomar has denied the allegations, though did settle one out of court and [did] not countersue for slander...all of which would give anybody pause...”

So at a time when HIV-positive people like Willie Campbell are getting jailed for spitting on people, which has virtually zero chance of spreading the virus, the Hall of Fame voting committee is more worried about who did and didn’t use steroids.

On the one hand, it is encouraging that Alomar’s HIV status didn’t factor into the committee’s decision and the media reporting of it. On the other, you have to wonder what will happen if it turns out he is HIV positive--and if that was his status when he had that little spitting incident.