Fibromyalgia, or fibromyalgia syndrome, is a chronic disorder that causes pain and tenderness all over the body. The condition is accompanied by extreme fatigue, sleep issues, memory and joint stiffness. In addition, about 20 percent of those who live with chronic pain also suffer from an anxiety disorder or depression, according to the Anxiety and Depression Association of America. Although fibromyalgia is related to arthritis, the condition doesn’t cause inflammation and damage to the joints, muscles or other tissues.

What are the symptoms of fibromyalgia?

Five million Americans, age 18 or older, are affected by fibromyalgia. Between 80 and 90 percent of those affected are women, but it can also affect men and children.

The cause of fibromyalgia is unknown. But some doctors believe that several factors are at play. One of those factors could be genetic, since fibromyalgia runs in families. Researchers are also looking at the possibility that the central nervous systems of people with fibromyalgia process pain differently. Others believe that a physical, emotional or traumatic event—such as an auto accident, surgery, infection or psychological stress—could cause the condition, although in many cases, there is no triggering event.

How is fibromyalgia diagnosed?

Fibromyalgia is very difficult to diagnose, and patients may see many doctors before the illness is pinpointed. This is because symptoms of fibromyalgia overlap with many other diseases. Currently, there are no diagnostic tests for the disease.

In addition, the American College of Rheumatology established criteria to help doctors make the diagnosis. These guidelines include individuals suffering three months of widespread pain throughout numerous areas of their body and problems with sleeping, thinking and remembering.

How is fibromyalgia treated?

Treatment of fibromyalgia is often very difficult and requires a team approach. Medications prescribed for fibromyalgia often treat the pain and the rheumatologic problems to help improve the quality of life of the patient.

There are three medications that the Food and Drug Administration has approved to treat fibromyalgia:

Other medications used to treat fibromyalgia include pain-relieving analgesics and nonsteroidal anti-inflammatory drugs (NSAIDs), such as aspirin, ibuprofen and naproxen sodium. 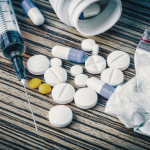 Advil vs. Tylenol: Which One Should You Take and When?