Stigma and systemic racism can kill, according to the first study to look at suicide risk among HIV-positive youth.

Adolescents and young adults who acquired HIV at birth are more likely to attempt suicide than their HIV-negative peers, according to the first study dedicated to evaluating suicide risk among youth living with HIV. Those facing stigma and other hardships in life are even more likely to try to take their lives, researchers reported last week at the 24th International AIDS Conference (AIDS 2022) in Montreal.

The unique circumstances for young people with HIV are part of a larger problem of youth suicide, which has ballooned in recent decades. Suicide is now the second most common killer of adolescents and young adults, claiming the lives of more than one in 10,000 each year.

Though suicide can affect anyone, certain experiences can heighten the risk. Among young people living with HIV, feeling stigma about their status can be associated with suicide attempts. Other hardships, like dealing with mental illness, pregnancy, a history of arrest, city stress and other negative life experiences are also associated with higher rates of suicide attempts in this group.

LGBTQ youth who acquired HIV at birth also have higher rates of suicide than straight and cisgender peers their age. This is in line with heightened suicide risk among queer young adults who do not have HIV. Almost half of LGBTQ youth seriously considered suicide during the past year, according to a national survey by the Trevor Project released earlier this year.

On the other hand, young people living with HIV are less likely to attempt suicide if they feel a strong sense of family and self-esteem, the research shows. Developing such support could be key areas to focus on in future interventions. 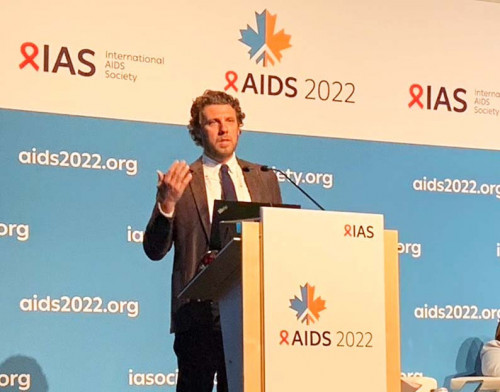 The research, led by Philip Kreniske, PhD, of the HIV Center for Clinical and Behavioral Studies at the New York State Psychiatric Institute and Columbia University, is the first of its kind and shows the need for further investigation into mental health among young people living with HIV.

The team compared a group of 206 young adults in New York City who were born with HIV to a group of 134 youth who were exposed to HIV in the womb but did not contract the virus. All identified as Black, Latino or both. Study participants were enrolled between 2003 and 2008, at about 12 years old, on average; now, their average age is 28. Respondents were asked about various sociodemographic, structural and emotional factors.

Overall, HIV-positive youth were found to be 1.74 times more likely than their HIV-negative peers to have attempted suicide during the past year.

But several risk factors significantly increased the likelihood of suicide attempts, including:

Many of the associations with suicidality observed in this study are consistent with those seen in previous research on mental health among young adults, such as psychiatric disorders, drug use and sexual and gender-minority status.

The study sheds light on potential mental health care interventions for young people living with HIV. The authors recommend further research on intersectional identities and the impact of systemic racism on suicide as well as studies to further investigate HIV stigma among youth and how it might impact suicide risk.

“For adolescents and young adults living with HIV, existing connections with medical clinics might provide an opportunity to intervene and address suicidality,” said Kreniske. “This falls in line with recent World Health Organization reports for integrating mental health into HIV services. I think, particularly, we need to [implement] suicide screeners and other tools to address this urgent issue.”