Trying to lose weight but finding it tough? You may want to get your vitamin D levels checked. New research conducted at the University of Milan shows that overweight and obese people diagnosed with vitamin D deficiency lost more weight and slimmed down when they took this supplement, Newsmax.com reports.

For the study, researchers put 400 overweight and obese people with a known vitamin D deficiency on a low-calorie diet. Next, scientists divided participants into three groups: The first group took no vitamin D supplements, while the two others took either 25,000 international units (IUs) or 100,000 IUs of vitamin D per month.

After six months, findings showed study participants in both groups taking vitamin D supplements lost significantly more weight and had greater reductions in their waistlines than the control group. As a result of the findings, researchers suggested that all overweight and obese people get their vitamin D levels tested.

But despite the excitement generated by the findings, doctors added a word of caution. “This study does not suggest that everybody looking to lose weight should start taking large doses of vitamin D,” said Christopher Ochner, MD, an expert in nutrition, weight loss and obesity at NYC’s Mount Sinai Hospital. This means supplementing with D is only likely to work if you are deficient in the vitamin.

Vitamin D supplements are widely available in stores and online. If you have a deficiency of this so-called “sunshine vitamin,” most doctors recommend a daily dose of 1,000 to 2,000 IUs. You can also get vitamin D from eating foods such as eggs, milk, yogurt, fish, cereal and orange juice. 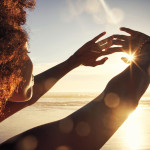