Twitter
Facebook
Pinterest
Tumblr
Email
Advertisement
AIDS targets set in the Millennium Development Goal (MDG) 6 are being met and are on track to end the epidemic by 2030, announced the Joint United Nations Programme on HIV/AIDS (UNAIDS) in a press release for its latest report.

Titled How AIDS Changed Everything—MDG 6: 15 years, 15 Lessons of Hope From the AIDS Response, the report details not only the accomplishments of the past decade and a half, but also the ways that the global AIDS response has affected people and communities.

Worldwide, between 2000 and 2014, new HIV infections have fallen by 35 percent—from 3.1 million to 2 million—and AIDS-related death declined by 41 percent. Without the AIDS response, it’s estimated that new infections would have risen to about 6 million by 2014.

The goal of putting 15 million HIV-positive people on treatment by 2015 has been met nine months ahead of schedule. What’s more, working toward MDG 6 has helped avert 30 million new HIV infections and averted 7.8 million AIDS-related deaths since 2000.

Below is a sample page from the UNAIDS report, comparing statistics from 2001, 2014 and 2030. To view and download the full document, click here. 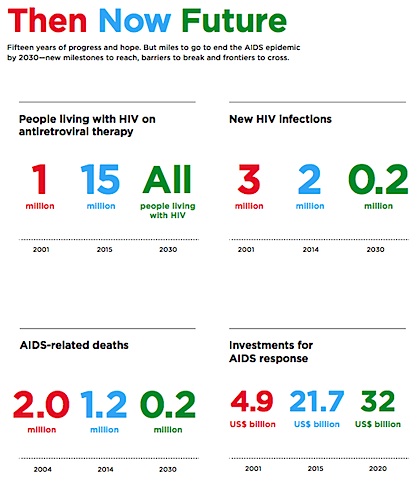