The Southern HIV/AIDS Awareness Day (SHAAD) makes its debut Tuesday, August 20, and Latinos are among those in the region at higher risk of the virus. The Southern AIDS Coalition (SAC) launched SHAAD as a chance to raise awareness and an opportunity for advocates across the nation to address the HIV crisis in the South. SHAAD will be marked each August 20.

In the video above, HIV infographic site AIDSVu visualizes the epidemic in the South. Take a deeper look at the AIDSVu statistics here.

The 16 states, plus Washington, DC, that make up the South account for 38% of the U.S. population, but as AIDSVu points out, the region made up 52% of new HIV cases in the country in 2017. The South also comprises 45% of all Americans living with HIV, according to data from the Centers for Disease Control and Prevention (CDC).

On August 20th, we mark the first ever Southern HIV/AIDS Awareness Day, to draw attention to disparities in new cases of #HIV impacting the southern United States. Go to https://t.co/VkDFo48hw0 to learn more. #SHAAD pic.twitter.com/I5oEZTo6aH

“Some communities in the South,” writes AIDSVu, “such as Black and Latino gay and bisexual men, are disproportionately impacted by HIV and are seeing increased rates of new infection—a chilling reminder that the HIV epidemic is far from a thing of the past.”

The SHAAD website, SouthernSolution.org, adds that more than 511,400 people are living with HIV in the South and that about 2,580 people in the region died of AIDS-related complications in 2017. 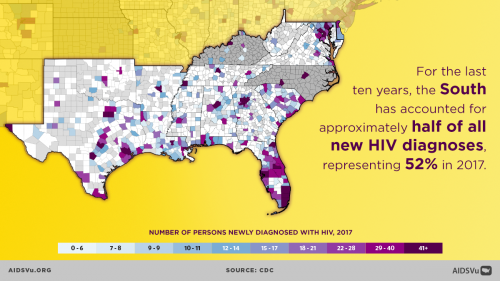 New HIV cases in the South, 2017Courtesy of AIDSVu.org

Earlier this year, Trump introduced his administration’s HIV initiative: Ending the HIV Epidemic: A Plan for America. As part of the plan, funding would go to the 48 counties (plus Washington, DC, and San Juan, Puerto Rico) and seven states with high rural HIV rates. Those states include Alabama, Arkansas, Kentucky, Mississippi, Missouri, Oklahoma and South Carolina. Some 48% of the targeted counties are in the South. To read more about the plan, click here.

#DYK 52% of all new HIV diagnoses in the United States are in the south. Visit https://t.co/VkDFo48hw0 to learn more about #HIV in the south. #SHAAD pic.twitter.com/VRDTYYZo3q

Visit the SHAAM website for resource guides, downloadable and sharable images (like the ones in this article), more data about HIV in the South and a list of SHAAM events.

In related POZ news, read the recent articles “The South Suffers a Lack of HIV Care Providers” and “Southerners Support HIV Prevention, but Many Don’t Know U=U and PrEP” or click #South.

Despite accounting for only 19% of the Southern population, Black Americans accounted for more than half of all new #HIV diagnoses in the South in 2017. Take a deeper look at HIV in the South to learn more: https://t.co/tfsJbxJjGM pic.twitter.com/aR0IwwhZrr 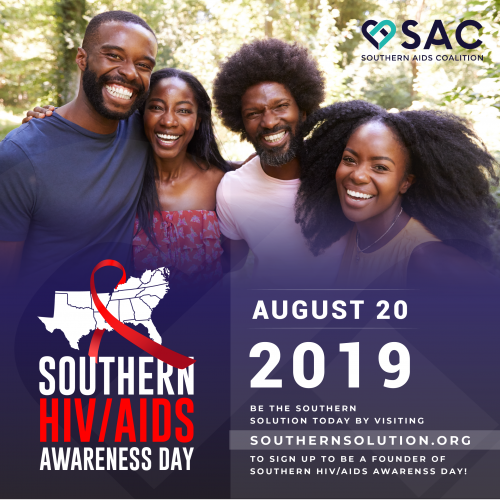