In 2014, San Francisco recorded 302 new HIV diagnoses and 177 deaths of HIV-positive people; these are the lowest-ever numbers in the city’s history of the epidemic and amount to a 17 percent drop from the previous year, reports the San Francisco Examiner.

The data arrive from the city’s Department of Public Health and bolster health officials’ “Getting to Zero” campaign, which includes the goals of zero new infections, zero HIV deaths, and zero stigma and discrimination.

Despite the declines in diagnoses and death, the city has also seen an increase of HIV infections among youth, most notable among young men of color, said Susan Buchbinder, MD, director of the city health department’s HIV prevention unit.

The “Getting to Zero” strategy entails getting more people tested, immediately linking those who are HIV positive to care and treatment, and developing a citywide program to promote pre-exposure prophylaxis (PrEP) for HIV-negative residents at risk. 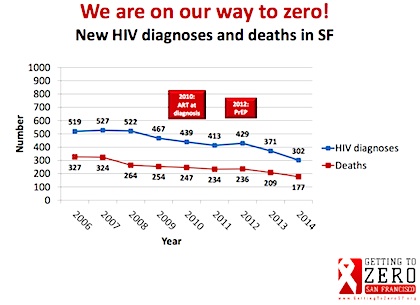 This chart from GettingToZeroSF.org shows HIV diagnoses and deaths since 2006. The red boxes note that antiretrovirals were prescribed at diagnosis beginning in 2010 and that PrEP launched in 2012.