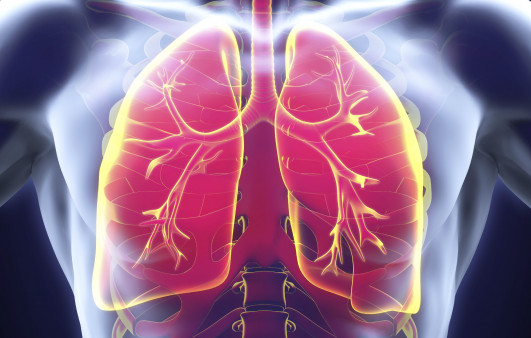 People Living With HIV Are at Greater Risk for Lung Cancer

However, lung cancer incidence among HIV-positive people has fallen over the past two decades.

People living with HIV are more likely to develop lung cancer compared with the general population, which may be related to a higher rate of smoking and immune suppression, according to study results published in The Lancet HIV. The good news is that lung cancer among HIV-positive people has declined over time, especially for younger age groups.

“The reduction in risk for lung cancer in people living with HIV is most pronounced among those younger than 50 years, who show substantial decreases in relative excess risk compared with the general population,” the study authors wrote. “However, for the increasing proportion of people living with HIV who are living beyond the age of 50 years, the absolute risk of lung cancer has surpassed that of common AIDS-defining cancers and is a considerable excess risk and public health burden.”

Prior research has shown that people with HIV are more likely to develop several types of cancer, including both AIDS-related cancers, such Kaposi sarcoma and non-Hodgkin lymphoma, and malignancies that are not directly attributed to HIV. Lung cancer is estimated to be the second most common cancer among people living with HIV in the United States, and it could account for 15% of all cancers in this population by 2030, the authors noted as background. But there has been little recent research on the risk of lung cancer in this group.

Cameron Haas, PhD, and Meredith Shiels, PhD, of the National Cancer Institute, and colleagues looked at lung cancer rates among people living with HIV using 2001 to 2016 data from the HIV/AIDS Cancer Match study, which links data from HIV and cancer registries from 11 states, Puerto Rico and Washington, DC.

The analysis included HIV-positive people ages 20 to 89 years. Three quarters were men, about half were Black, roughly a quarter were white and a quarter were Latino. The HIV population aged during the study period, with the proportion of people ages 50 or older doubling during 2001 to 2004 and 2013 to 2016. However, the proportion with a prior AIDS diagnosis, indicating advanced immune suppression, declined from 65% to 55%.

A total of 3,426 cases of lung cancer were identified during more than 4 million person-years of follow-up, for an overall incidence rate of 79.4 cases per 100,000 person-years. Adenocarcinoma (40%) and squamous cell cancer (25%) were the most common types, similar to the distribution in the general population. Black and white people with HIV had comparable lung cancer rates while Latinos had a lower rate. Men and women who inject drugs had a significantly elevated lung cancer risk compared with men who have sex with men.

The standardized incidence (SIR) ratio for lung cancer (a method of comparing rates in different populations) fell from 2.49 during 2001 to 2004, meaning HIV-positive people were two and a half times more likely than HIV-negative people to develop the malignancy, to 1.48 during 2013 to 2016, meaning people with HIV were 48% more likely to develop lung cancer. HIV-positive women who inject drugs had the greatest excess risk relative to their HIV-negative counterparts (SIR 3.27), while gay and bisexual men had the least excess risk (SIR 1.13).

Not surprisingly, since the likelihood of lung cancer increases with age, older people with HIV had the highest absolute risk (1,650 cases per 100,000 people over five years for those ages 70 and older versus 20 cases per 100,000 for those ages 20 to 39). Older people also had the greatest excess absolute risk, or number of extra cases compared with their HIV-negative peers. During 2013 to 2016, HIV-positive people ages 60 to 69 had 48 additional cases per 100,000 person-years. For people over 50, the incidence of lung cancer equaled or exceeded that of non-Hodgkin lymphoma and Kaposi sarcoma starting in 2011.

Although data on smoking status were not available in this study, surveys done during the same period found that the estimated rate of smoking was 47% among people with HIV—nearly twice the 26% rate in the general population. The authors noted that smoking might explain the excess risk of lung cancer among older people, but it wasn’t enough to account for the higher risk in the younger groups.

In 2021, the U.S. Preventive Services Task Force updated its guidelines for the general population to recommend annual lung cancer screening for people ages 50 to 80 who have at least a 20 pack-year smoking history (the equivalent of one pack of cigarettes a day for 20 years). This is up from age 55 and a 30 pack-year smoking history in the previous guidelines. But prior research suggests that people with HIV might benefit from starting screening sooner. In an accompanying commentary, Adam Januszewski, MBBS, PhD, of St. Bartholomew’s Hospital, and Mark Bower, MD, PhD, of Chelsea and Westminster Hospital in London, suggested that HIV status should perhaps be considered for inclusion in lung cancer screening criteria.

In addition to smoking, immunosuppression and pulmonary inflammation likely also play a role in the development of lung cancer, the study authors suggested. A previous study in France found that the excess risk of lung cancer among people with HIV was smaller if they were on effective antiretroviral therapy and experienced CD4 cell recovery. Conversely, a prior AIDS diagnosis was associated with an increased risk of lung cancer in the present study.