These encouraging results do not apply, however, to people who remain undiagnosed.

Almost everyone diagnosed with HIV in the United States is covered by some type of health insurance and has received HIV care during the past year, according to the latest report from the Centers for Disease Control and Prevention (CDC) Medical Monitoring Project (MMP). But people living with HIV continue to face challenges, including depression, unstable housing and stigma.

The Medical Monitoring Project is an annual survey that assesses behavioral and clinical characteristics of a nationally representative sample of adults diagnosed with HIV in 16 states and Puerto Rico. The latest report is based on data collected between June 2019 and May 2020. It therefore includes only a few months during the COVID-19 pandemic, which has disrupted HIV care and services. 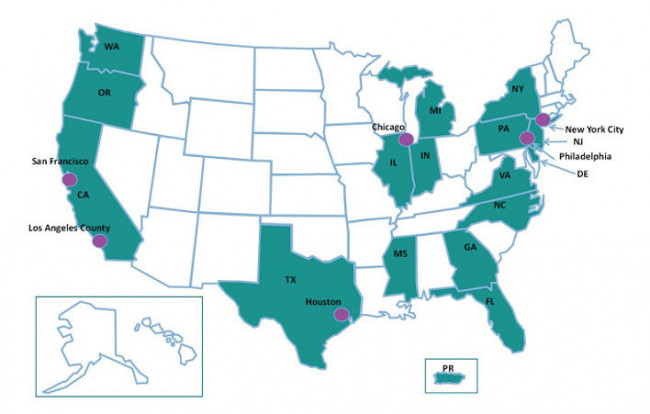 A total of 4,100 people drawn from the National HIV Surveillance System participated in the survey. Three quarters were cisgender men, 23% were cisgender women and 2% were transgender. Most (85%) were born in the U.S.; 42% were Black, 29% were White and 22% were Latino. Nearly half (46%) identified as heterosexual or straight, 42% as gay or lesbian, 9% as bisexual and 3% as other. A majority (56%) had more than a high school education. Almost three quarters (74%) were at least 40 years old, and 68% had received an HIV diagnosis at least 10 years earlier. While the median CD4 T-cell count was over 600, indicating good immune status, 57% had ever had an AIDS diagnosis, and 8% currently had a CD4 count below 200.

High Levels of Insurance and Care

The good news is that an estimated 98% who were tested and diagnosed with HIV had health insurance or coverage for care or medications. Of these, 46% had coverage through the Ryan White HIV/AIDS Program, 45% were on Medicaid, 28% were on Medicare, 34% had private insurance, 21% received Social Security Disability Insurance and 18% received Supplemental Security Income (some had more than one type of coverage). An estimated 41% were unemployed, 42% had household incomes at or below the federal poverty level and 43% had a disability.

The number of HIV-positive people with health insurance increased dramatically when the Affordable Care Act enabled states to raise the income limit for Medicaid, but 12 states have not done so—including states in the south that have some of the highest HIV rates.

Overall, 97% of survey respondents had received outpatient HIV care at any time during the past year and 79% were retained in care during the past 12 months. Most (98%) said they had ever taken antiretroviral therapy and 94% said they were currently on treatment, although just 83% had a prescription for antiretrovirals in their medical records. Half of those who had stopped treatment said they did so due to financial or insurance problems. 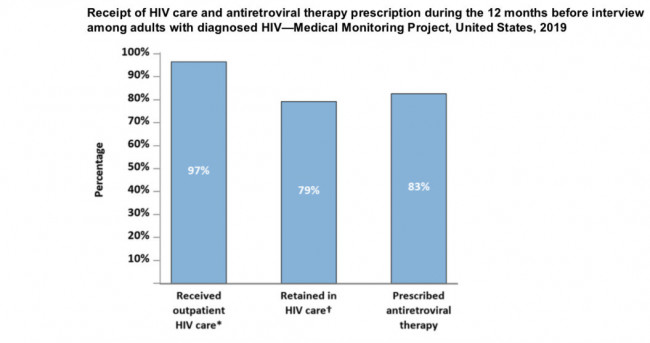 A smaller proportion (61%) reported complete medication adherence during the past month. The most common reasons for missed doses were forgetting (60%), a change in daily routine or being out of town (40%), falling asleep early or oversleeping (35%), difficulty getting a prescription or refill (20%) and feeling depressed or overwhelmed (7%). Most (76%) said they had not been bothered by treatment side effects during the past month.

Importantly, these figures only apply to people diagnosed with HIV. The CDC estimates that about 13% of the more than 1 million people living with the virus in the U.S. do not know their status and therefore are not receiving care and treatment. People who are not on treatment and don’t have viral suppression are at risk for disease progression and can transmit the virus to others.

While the high proportion of people who have insurance and are receiving care is encouraging, people living with HIV continue to face challenges, the report reveals.

An estimated 16% of respondents had symptoms depression and 21% had symptoms of anxiety during the past two weeks. Substance use was common. About a third currently smoked tobacco, 61% drank alcohol (including 15% who reported binge drinking in the past month) and 32% used noninjected recreational drugs (29% marijuana, 7% poppers, 6% cocaine, 5% methamphetamines, 4% club drugs, 3% crack). But just 3% reported injection drug use (2% methamphetamines and 1% heroin).

A quarter of respondents said they had ever been physically hurt by a romantic or sexual partner, including 4% during the past year. What’s more, 17% said they had ever been threatened with harm or physically forced to have unwanted sex, including 1% during the past year. Finally, on a stigma scale of 0 to 100, respondents had a median score of 31.

The survey also asked about use of and need for HIV-related services. The most commonly reported HIV service received during the past year was HIV case management (57%), and 7% had an unmet need for it. Nearly two thirds (61%) had received counseling from a health care provider about HIV and sexually transmitted infection (STI) risk reduction; in addition, 32% had a one-on-one conversation with an outreach worker or counselor and 12% participated in a small group session about HIV and STI prevention. Almost all women (88%) had received a Pap test to screen for cervical cancer (related to human papillomavirus) in the past three years, and 45% of all respondents had been tested for chlamydia, gonorrhea and syphilis in the past year. Almost half (46%) received free condoms from various organizations.

Information gathered from the MMP provides “important and extensive information about the use of—and need for—specific health care services, barriers to receiving HIV care and factors affecting adherence to [antiretroviral] medication and viral suppression,” the report concludes. “This information can be used to help improve the quality of HIV prevention, care and treatment services for people with diagnosed HIV throughout the United States.”

Elimination of the ACA’s Individual Mandate Has Affected Latinos