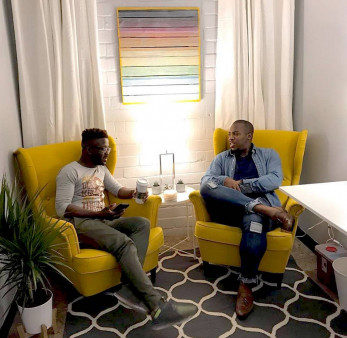 Daniel Driffin, left, and a friend at the opening of The SPOT Facebook/@AbsoluteCARES

Located at the Rush Center, the SPOT builds upon the knowledge of people living with HIV.

Folks in Atlanta have a new place to get tested for HIV—one that’s sex positive, anti-racist, LGBT-friendly and inclusive of people living with the virus. Named the SPOT, the testing center opened this week at the Rush Center, where several LGBT organizations meet regularly, according to Project Q Atlanta.

An HIV testing center can be an important tool for tackling the local epidemic. Metropolitan Atlanta has the fourth-highest rate of new HIV cases in the nation, and gay and bisexual men in Georgia are seeing alarming jumps in HIV rates in their population.

The SPOT is the result of the combined efforts of the Rush Center, Thrive SS, Georgia Equality, AbsoluteCARE Medical Center & Pharmacy and Atlanta Harm Reduction Coalition, reports Project Q. It received a $75,000 grant from Gilead Sciences, a pharmaceutical company known for its HIV meds, notably Truvada, which is also used as pre-exposure prophylaxis (PrEP).

The SPOT will be open from 10 a.m. to 5 p.m. weekdays and will have some night and weekend hours.

“The SPOT was created to be a new solution of quality care for LGBTQIA folks who are not always comfortable at our traditional service providing agencies,” Daniel Driffin, an HIV activist and cofounder of Thrive SS, told Project Q.

Emily Halden Brown, director of community engagement initiatives at AbsoluteCARE, added that the SPOT will build on the knowledge and expertise of people living with HIV because they know better than anyone else what it’s like to test positive, deal with the stigma and navigate the health care system.

There’s no word yet on what the acronym “SPOT” stands for, though Brown hinted it would be revealed at a later date.

What Latinx Transgender People Need to Know About HIV Testing