The 2019 theme is: “Living with HIV or not…we’re fighting this together.”

National Latinx AIDS Awareness Day (NLAAD) 2019 is marked Tuesday, October 15. NLAAD was founded in 2003 by the Latino Commission on AIDS and the Hispanic Federation to promote HIV testing and education among Latinos. October 15 coincides with the last day of Hispanic Heritage Month. 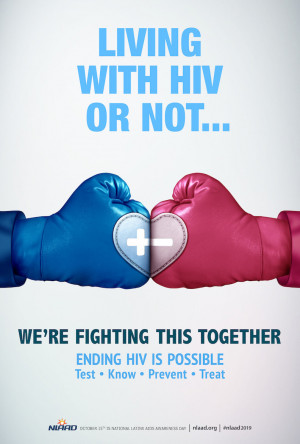 This year’s theme is “Living with HIV or not…we’re fighting this together.” The campaign, according to NLAAD.org, “wants to address that people of either HIV status have a say on ending HIV, in stopping new diagnoses. The campaign wants to break the stigma that only one group bears the responsibility.”

That’s why images of the 2019 campaign show two boxing gloves bumping up against each other. One has a plus sign and the other has a minus sign; together they form a heart, showing that people living with and without HIV complement each other and can join a unified fight against the epidemic.

Watch the launch of the 2019 NLAAD campaign in New York City:

Latinx (pronounced “La-teen-ex”) is a gender-neutral alternative to Latino and Latina.

1 in 6 Hispanics/Latinos with HIV is unaware they have it. NIMHD’s #LanguageAccessPortal includes information on #HIV/AIDS in multiple languages, including Spanish. Spread the word and help us bridge this gap. #NLAAD https://t.co/CPRr1XYgsk pic.twitter.com/d5vkwtgtTk

According to the Centers for Disease Control and Prevention (CDC), Latino men who have sex with men (MSM) are the second-most affected subpopulation in the United States, after Black MSM. Overall, Latinos made up 18 % of the U.S population but accounted for 26% of new HIV diagnoses in 2016; among those, 87% were among men.

As the awareness video at the top of this article states, PrEP, or pre-exposure prophylaxis, is one way that people who are HIV negative and at risk of the virus can stay negative. PrEP is a daily pill that can reduce the risk of getting HIV by more than 99%. Two meds have been approved as PrEP: Truvada and Descovy. For more, click here.

Meanwhile, people who are living with HIV can contribute to ending the epidemic by taking daily meds to suppress the virus. People with an undetectable viral load cannot transmit HIV via sex, a fact known as Undetectable Equals Untransmittable, or U=U.

Did you know… #TheWellProject has a library of 45 fact sheets in Spanish, as well as our blog #UnaChicaComoYo for women living with HIV? #NLAAD is October 15. Check out and share our Spanish resources here: https://t.co/yP7HC5S5hO #HIV #VIH #women #Spanish pic.twitter.com/aT24kGVJK9

In conjunction with NLAAD, many organizations offer HIV testing and related events. Visit NLAAD.org to learn more and download infographics like the ones in these tweets posted in this article.

On October 23rd, 2019 HHC(Haitian American Community Coalition) will be hosting an event for NLAAD with food, music, HIV testing, information about PrEP/PEP, and gift cards! It will be happening at 3807 Church Ave. Brooklyn, NY 11203.#NLAAD #HIV #Brooklyn pic.twitter.com/ykCcUpzvKa