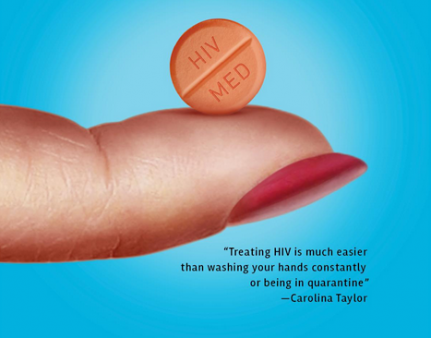 The theme of this year’s #NLAAD is “Ending HIV Is at Your Fingertips.”

Thursday, October 15, marks National Latinx AIDS Awareness Day (NLAAD) 2020. Spearheaded by the Latino Commission on AIDS, the day is “a community mobilization that promotes the effective ways to prevent, treat and stop the spread of HIV among Latinos,” according to NLAAD.org, which adds: “We’re closer than ever to flatten the HIV curve. Join the campaign. Ending HIV is at our fingertips.”

Campaign images for #NLAAD2020Courtesy of the Latino Commission on AIDS

In fact, the theme of #NLAAD2020 is “Ending HIV Is at Your Fingertips.” Related campaign materials, in both English and Spanish, show a series of fingertips. On each one is an item that represents a way to prevent, test for and treat HIV. For example, one image shows a drop of blood from a finger prick; the headline reads: “Unlike other viruses, testing for HIV is at your fingertip.”

(By the way, don’t be confused by the term Latinx. It’s simply a modern-day gender-neutral and nonbinary version of Latino.)

According to the Centers for Disease Control and Prevention, “HIV continues to be a serious threat to the health of Hispanic/Latino communities. In 2018, adult and adolescent Hispanics/Latinos made up 27% of the 37,968 new HIV diagnoses in the United States and dependent areas.” Of those cases among Latinos, 85% were a result of male-to-male sexual contact.

As NLAAD infographics point out, HIV disproportionately affects Latino communities. Despite making up over a quarter of new diagnoses in the country, they represented just 18% of the U.S. population in 2017. What’s more, one in four Latina trans women is estimated to be living with HIV.

Puerto Rican rapper Bad Bunny gets it. Puerto Rican rapper Bad Bunny gets it. Stigma, fear, discrimination, and homophobia may impact the lives of some Latinx people, which can lead to care avoidance and put them at higher risk for HIV. Tomorrow, we recognize National Latinx AIDS Awareness Day. We encourage you to learn more about the impact of HIV/AIDS on Latinx communities in our latest blog post, found at the site linked to in our profile. @badbunnypr #NLAAD #StopHIVTogether #NLAAD2020 @OfficialNLAAD @latinocommaids #badbunny #badbunny????

Numerous events—both in person and virtual—such as HIV testing initiatives and webinars are scheduled around NLAAD. Visit the NLAAD website or search #NLAAD on social media for more.

In related news, ViiV Healthcare recently published a report on HIV and Latino gay and bisexual men, featuring many of the concerns and stories from this population. For details see “Hear From Latino Gay and Bisexual Men Affected by HIV.”

In writing about the ViiV report and listing sessions, Forbes.com highlighted how anti-immigrant laws and sentiment influence the health and safety of the Latino community. For more, see “ICE Raids Are Stopping Latinx Queer and Trans Men From Getting HIV Care.”

In related POZ news, check out the profile on LatinX+, a new grassroots network helping Latinx with HIV define their own agenda, as well as the spotlight on POZ Hero Cristina Herrera, who provides support for the Latinx transgender community. Plus, read “These Boys From Brazil Find Love and Fun Amid HIV,” an interview with young adult author Lucas Rocha.