There are several ways to get tested for HIV, including at-home tests. AIDSVu.org

The #HIVTestingDay theme is “My Test, My Way.” Here’s how to get free at-home HIV testing kits and to locate testing sites near you.

Sunday, June 27, marks National HIV Testing Day (#HIVTestingDay) 2021. It’s an opportunity to raise awareness of HIV testing and the importance of knowing your status. This year’s theme is “My Test, My Way,” which emphasizes the various ways and places to get tested for HIV, including self-tests at home.

.@CDC_HIVAIDS recommends that everyone between the ages 13 to 64 get tested for #HIV at least once in their lifetime. Get tested for #NationalHIVTestingDay: https://t.co/hIuBgJQ7Vb pic.twitter.com/ImiVEakkxf

What’s the big deal about getting testing? As the POZ Basics section on HIV Testing explains:

If you think you might have been exposed to HIV, it’s important to get tested promptly. If you test positive, starting antiretroviral treatment quickly will minimize damage to your immune system and reduce the risk of transmitting the virus to others.

According to the Centers for Disease Control and Prevention (CDC) there are about 1.2 million people living with HIV in the United States. The CDC estimates that around 14% of people with HIV do not know they carry the virus, and nearly 40% of new HIV infections are transmitted by people who don’t know their status.

To encourage more people to get tested for HIV, many health departments, local and national governments, HIV groups, churches and countless other organizations offer HIV testing and awareness events built around #HIVTestingDay. 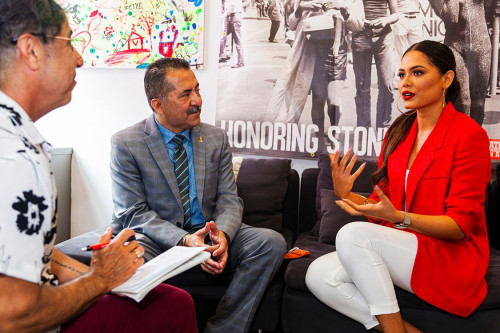 For example, Miss Universe 2021, Andrea Meza, of Mexico, teamed up with the Latino Commission on AIDS for a series of testing events. She recently stopped by GMHC, a historic HIV organization in New York City, to take a rapid HIV test and learn more about sexual health. For more details, see “Miss Universe Andrea Meza Gets Tested for HIV.”

Another example is the “My Body, My Health” initiative launched this week by LGBTQ advocacy group Human Rights Campaign (HRC). To address HIV in minority and high-risk communities—notably gay and bisexual Black and Latino men and transgender women of color—the initiative offers free at-home testing. Learn more in the article “HRC Teams With Six LGBTQ Black and Latino Groups to End HIV.”

Free at-home HIV test kits are also available through TakeMeHome.org, as are tests for sexually transmitted infections (STIs), such as chlamydia, gonorrhea and syphilis. For details, read “Get Tested for HIV and STIs at Home, for Free.”

To find HIV testing options near you, search #HIVTestingDay and #NHTD on social media (sample posts are embedded throughout this article). AIDSVu.org can connect you to free at-home HIV tests and an HIV services locator—simply type in your city, state or ZIP code ti find where you can get tested and access HIV care, pre-exposure prophylaxis (PrEP), harm reduction and trauma-informed care. In addition, AIDSVu.org—which is presented by Emory University’s Rollins School of Public Health in partnership with Gilead Sciences and the Center for AIDS Research at Emory University—offers sharable infographics about HIV testing as well as Q&As and data.

Similarly, you can visit the HIV testing locator on HIV.gov, which helps you discover a variety of HIV-related services in your area. For upcoming discussions on HIV testing, HIV.gov recommends the following:

In 2018, youth aged 18 to 24 and people 65 and older recorded the lowest rates for #HIV testing. Use the AIDSVu service locator to find a testing site near you: https://t.co/OmUj77LAk4 pic.twitter.com/Yvz4h8AkCe

Not enough people in the United States are getting tested for HIV, according to a new report published in the CDC’s latest Morbidity and Mortality Weekly Report. The study looked at HIV testing in clinical settings and found the following:

The percentage of males and nonpregnant females [13 years old and older] with either commercial insurance or Medicaid who received testing for HIV increased from 2014 to 2019 but was less than 6%. Testing rates were higher among persons with Medicaid than those with commercial insurance; among those with Medicaid, rates for Black/African Americans and Hispanic/Latino persons were higher than for White persons.

Increasing HIV testing in clinical settings by at least threefold is essential to achieve the goal of [more than] 95% of persons with HIV being aware of their infection by 2025 and to reduce disparities in HIV diagnoses.

The goals mentioned above refer to those of the federal initiative titled “Ending the HIV Epidemic: A Plan for America.” It’s a 10-year initiative that aims to lower new HIV rates 75% by 2025 and 90% by 2030. This would amount to fewer than 3,000 HIV cases a year. One of the main pillars of the plan is to diagnose everyone with HIV as early as possible, which is why testing is so important.

Other pillars of America’s HIV plan are getting people who test HIV positive on treatment quickly and helping them achieve an undetectable viral load (this not only improves their own health but also means they cannot transmit the virus sexually), preventing people at risk from becoming HIV positive and rapidly detecting and responding to emerging HIV clusters.

How’s your state doing in the nation’s plan to end HIV? Find out with the interactive AHEAD dashboard. To learn more about the “Ending the HIV Epidemic” initiative, read an overview at HIV.gov and visit the official webpage at HRSA.org. For a related POZ article, see “Plans to End the HIV Epidemic at Home and Abroad.”