Are Microchip Meds the Pills of the Future?

Did you take all of your medications today at the right time, right dose and right number? If you’re not sure, you’re not alone. For a lot of Americans, drug adherence is one of the toughest things for getting and keeping our health on track. That’s why scientists at the Massachusetts Institute of Technology (MIT) are working hard to develop microchips that could replace our daily pill-popping problems, CNN.com reported.

According to MicroCHIPS, a company that has been working at MIT to make these futuristic devices a reality since the 1990s, the chips would come pre-loaded with drugs, be implanted in our bodies and then be programmed to give us meds at any given time, interval and dose. What’s more, a doctor would be able to adjust a patient’s drug regimens or stop them completely, all by remote control.

Sound like a science fiction novel? Well, so far, this bit of modern science seems to be working. A 2012 study using an implanted chip below the waist for eight women with osteoporosis found that the device worked just as well as when women were given drugs by injection.

The current version of the chip is about the size of a Scrabble tile and can be used to deliver a multitude of drugs. Scientists say versions of the device developed down the line could potentially be used to help treat multiple sclerosis, heart attacks, strokes and even allergic reactions in at-risk patients.

In fact, MicroCHIPS says it is aiming to release its first product to the public in 2017: a birth control device that releases a constant daily dose of hormones. The company hopes the first version would help prevent pregnancy in patients for five years. But later versions could work for up to 16 years at a time.

Did you know scientists are also getting close to developing a birth control pill for men? Click here for more information. 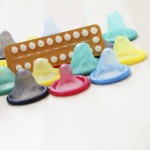