Got Pain? Meditation Can Help

Meditation can reduce your sensitivity to pain, according to findings in the Journal of Neuroscience and reported by Health.com.

To test meditation’s pain-reduction benefits, researchers mildly burned 30 male and female participants’ calves with a heated probe on two occasions. Before and after these sessions, participants attended four 20-minute meditation trainings. After scientists burned participants the second time, they instructed the men and women to meditate. On average, after their second brush with the heated probe, participants rated being burned as 57 percent less unpleasant and 40 percent less intense.

“That’s pretty dramatic,” said Fadel Zeidan, PhD, the study’s lead author and a postdoctoral researcher at the Wake Forest University School of Medicine, in Winston-Salem, North Carolina. The reduction in pain ratings was substantially greater than those seen in similar studies involving placebo pills, hypnosis and even morphine and other painkilling drugs, Zeidan added.

What’s more, participants’ brain scans showed meditation caused numerous changes in how their brains responded to pain. Before participants meditated, the somatosensory cortex area in their brains, which contains a sort of body map, was activated when the heat probe touched their right calves. But when the men and women meditated, there was little activity in the area.

The study suggested that meditation changes how pain is perceived and helps people handle it better.

But beyond that, these findings could also be key to seeing meditation’s effect on “real-life pain,” especially chronic pain and the trauma, depression and other physical and mental processes that often accompany this kind of suffering. 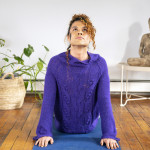