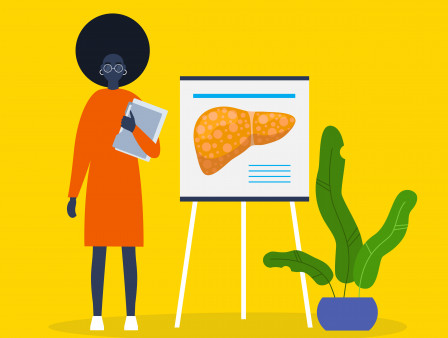 May Is Hepatitis Awareness Month 2021

About 2.4 million Americans are living with hepatitis C and 862,000 have hep B. Spread the word about this hidden epidemic.

May is Hepatitis Awareness Month in the United States. It’s a time designated to promote the awareness and prevention of viral hepatitis, an inflammation of the liver that can become chronic and lead to death.

About 2.4 million people in the United States are living with hepatitis C, and 862,000 have hepatitis B, according to the Centers for Disease Control and Prevention (CDC), which also estimates millions of Americans are living with viral hepatitis and don’t know it.

May is #HepatitisAwarenessMonth! CDC recommends #HepatitisB vaccination for certain groups, including all children and high-risk adults. Learn more about Hep B: https://www.cdc.gov/hepatitis/hbv/index.htm

To get the word out about this hidden epidemic, the CDC recommends that you share the ABCs of viral hepatitis—especially hepatitis B and C testing and treatment—and promote the CDC’s adult vaccine assessment tool, which spells out which vaccines are recommended based on age, health and profession.

You can learn the basics of hepatitis, including hep A, B and C as well as non-alcoholic fatty liver disease (NAFLD), non-alcoholic steatohepatitis (NASH), alcoholic liver disease and other types, on the Hepatitis Basics in HepMag.com. What’s more, people living with HIV often have problems that affect the liver, including viral hepatitis and fatty liver. To learn more, see the POZ Basics on HIV and Your Liver.

Hepatitis advocacy efforts in May also include these annual events:

Look to your local health care provider or state or city health department to learn about the campaigns taking place in your area. For example, the North Carolina Department of Health and Human Services is encouraging residents to get tested, noting that over 175,000 people in the state are currently living with diagnosed chronic viral hepatitis.

“The most important message for anyone who is at risk is to get vaccinated against hepatitis A and B to prevent infection. It is also important to get tested and to seek treatment if you are infected,” Zack Moore, a state epidemiologist, said in the Watauga Democrat. “Viral hepatitis is preventable and manageable with the proper diagnosis and medical care. Getting vaccinated and tested could save your life.”

The Latino Commission on AIDS spearheads a hepatitis awareness campaign geared toward the Latino community. “Statistics from the Office of Minority Health show that Hispanics/Latinos are 60 percent more likely to die from viral hepatitis than whites, and that despite having lower rates of hepatitis C, Hispanics were 50 percent more likely to die from that condition, in 2015,” writes HispanicHepatitisDay.org.

But let’s back up and cover more of the basics. As Hep Mag’s introduction to hepatitis explains:

Inflammation of the liver—hepatitis—has several possible causes, including:

• Toxins and chemicals such as excessive amounts of alcohol

• Fat, which may cause fatty liver disease

Hepatitis A virus (HAV), hepatitis B virus (HBV) and hepatitis C virus (HCV) infect liver cells called hepatocytes, which provide the best conditions for these viruses to reproduce. In response to the infection, the body’s immune system targets the liver, causing inflammation (hepatitis). If the hepatitis is severe (which can happen with HAV and HBV) or goes on for a long period of time (which can happen with HBV and HCV), hardened fibers can develop in the liver, a condition called fibrosis.

Over time, more and more normal liver tissue can be replaced by hardened scar tissue, which can obstruct the normal flow of blood through the liver and seriously affect its structure and ability to function properly. This is called cirrhosis. If the liver is severely damaged, blood can back up into the spleen and the intestines, which can result in high pressure in these organs. Consequences of this condition—called portal hypertension—include bleeding (variceal bleeding) and fluid in the abdomen (ascites). Significant liver damage can also reduce the production of bile needed for proper digestion, and it can decrease the liver’s ability to store and process nutrients needed for survival. Other effects of a damaged liver include the inability to remove toxins from the bloodstream, which can eventually lead to mental confusion and even coma (hepatic encephalopathy).

You can learn more about the hepatitis B and C epidemics in the United States—including the number of cases in your own county and state—by visiting HepVu.org. Run by Emory University’s Rollins School of Public Health, the site offers interactive maps based on the latest data.

HepVu also presents facts about hepatitis and the opioid crisis. For example, the number of hep C cases tripled between 2010 and 2016, mostly because of the increase in injection drug use (hepatitis C can be transmitted through shared needles and equipment). What’s more, HepVu offers informational graphics you can share on social media, such as those posted in this article.

In related news, earlier this year, the Department of Health and Human Services released the Viral Hepatitis National Strategic Plan for the United States, a road map for eliminating viral hepatitis as a public threat by 2030. For details, see “Five Goals of the New National Plan to End Viral Hepatitis.”