Watch an inspiring video that highlights her work—and her quest to become a citizen.

Lorena Borjas, who tirelessly worked to help the immigrant and transgender communities in Queens, New York, died of COVID 19, the disease caused by the new coronavirus, according to NY1.com. She was 60.

Borjas immigrated from Mexico in 1981 in order to transition to living as a woman. Eventually she became a beloved advocate and mother figure to many.

She helped organize one of the first transgender marches in the city and fought tirelessly for her communities, operating HIV-testing programs and syringe exchanges and fighting to change police policies toward trans people and sex workers.

Early this morning prominent trans Latinx activist Lorena Borjas returned to her ancestors after passing away from #COVID19. May her journey be filled with light and joy for all that she did on behalf of the community. ❤️#RestInPower

“She specialized in helping transgender immigrant sex workers, who are often the target of hate crimes…who are often shunned by society. And she was their voice…someone strong and in the forefront and always helping to lift them up and raise money for them,” Jim Burke, an activist, told NY1.com.

We are saddened to learn that our dear friend and colleague, Lorena Borjas, passed today to COVID-19 related complications. It goes without saying that we are proud that Lorena, a legendary organizer and champion for LGBTQ+ services, found her home with us at CHN. What we will miss most is how generous she was with her boisterous, raspy laughs, her colorful wardrobe, how passionate she was about championing the rights of our patients, specifically our trans and immigrant populations, and how tireless she was in her efforts both with us and in the community. We will miss you, Lorena. Your impact here will forever remain. #LorenaBorjas

After surviving sex trafficking and abuse—and being arrested for prostitution in the 1990s—she became an advocate for others in similar situations.

Because of her past convictions, Borjas was unable to become a citizen and faced deportation. In 2017, New York Governor Andrew Cuomo pardoned her. Borjas was profiled in an inspiring segment by Queens Public Television that you can watch below.

Borjas was the founder and CEO of Colectivo Intercultural TRANSgrediendo, an intercultural collective that focuses on trans communities, which addressed the abuse and lack of representation many trans people face.

“A gigantic loss for our trans and diverse Hispanic/Latinx communities,” said Guillermo Chacon, president of the Latino Commission on AIDS and founder of Hispanic Health Network, in a statement. “Lorena was a wonderful human being. She will be missed tremendously by all of us who had the chance to know her and the pioneering work she did to secure support services for our communities and addressing injustices in immigration, stigma and discrimination.” 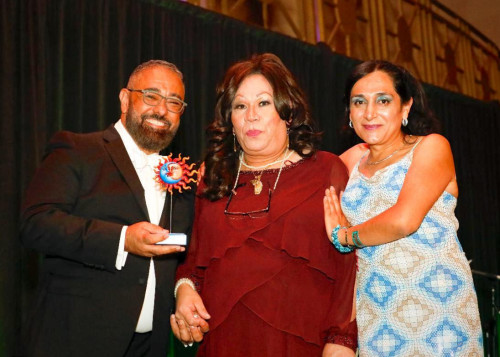 Last year, the Latino Commission on AIDS honored Borjas with its Fuerza Award, which honors those who have fought for HIV-related services, research and medical treatment and prevention. The same year, she was also honored by Iris House for her HIV advocacy.