The bilingual “How Low Can You Go? ” campaign spreads the power of U=U to prevent HIV.

¿Qué Tan Bajo Puedes Llegar, San Antonio? That’s the question that a new HIV campaign is asking the residents of San Antonio. But what does that mean, exactly? The question references an HIV-positive person’s viral load (how much of the virus can be found and measured). Science proves that when people living with HIV take meds and maintain a viral load so low as to be undetectable then they cannot transmit HIV sexually, even when condoms are not used.

This fact is better known as Undetectable Equals Untransmittable, or U=U. It means that in addition to keeping people with HIV healthy enough to enjoy a normal life span, maintaining a suppressed viral load with daily treatment also prevents them from spreading the virus to their partners. 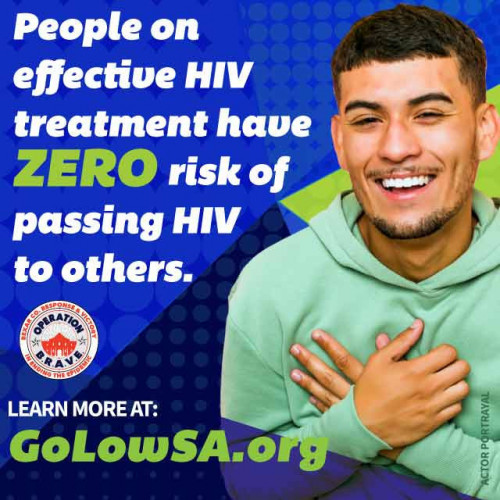 An image from the “How Low Can You Go?” campaignOperation B.R.A.V.E.

The media campaign is titled “How Low Can You Go?” and is created by Operation B.R.A.V.E. (Bexar County Response and Victory in Ending the Epidemic), which in a press release described the U=U message as “life-changing news for the more than 6,400 people living with HIV in Bexar County.”

About 37% of those with HIV in the county do not have a suppressed viral load, according to the press release, which notes that this could be due to many reasons, including health and socioeconomic factors.

Operation B.R.A.V.E.’s goal is to get 90% of the county’s residents living with HIV to reach viral suppression by 2030.

“When I was diagnosed, taking meds felt like the beginning of the end of my life. It was very difficult for me to accept,” said Greg Casillas in the press release. He has been living with HIV for 20 years and has been undetectable since 2018. “When I learned new HIV meds could help me live a long, normal life, I confronted the internal stigma I had created and started care. Marrying the man of my dreams meant I needed to do it for him too. By taking my meds and staying healthy, I cannot pass HIV to him. It’s not a cure for HIV, but it’s the next best thing.”

You can learn more about the San Antonio campaign at GoLowSA.org; for the Spanish version, visit BajarSA.org. Both sites include images you can download as well as videos about U=U like the one above.

For related U=U news, read “How Well Do U=U and PrEP Work? The CDC Updates Its Answers” and check out the March 2019 POZ cover story “Understanding Undetectable Equals Untransmittable” and its companion feature, “Viral Load Does Not Equal Value.”