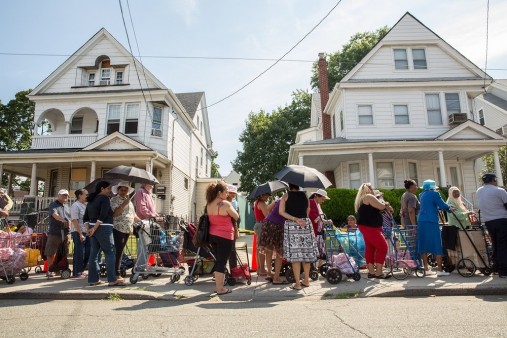 From the exhibit “Hidden in Plain Sight: Portraits of Hunger in NYC” Courtesy of Joey O’Laughlin

Brooklyn-based artist Joey O’Loughlin on the intersection of HIV with food pantries, the working poor and hunger in New York City.

It’s not easy to stand in a food line. But Brooklyn-based artist Joey O’Loughlin wants to show how food pantries can help hold our communities together.

The Brooklyn Historical Society recently wrapped up a year-long exhibition titled Hidden in Plain Sight: Portraits of Hunger in NYC, which featured photographs of dozens of New Yorkers who rely on food pantries to make ends meet. The exhibit focused on the idea of food pantries — which were pioneered by HIV advocates in the 1980s — as a vital lifeline for millions of people living in poverty today.

O’Loughlin was commissioned in 2012 by the Food Bank of New York City to document the growing food lines in every borough of the city, and to foster connections between the people standing in these lines and the people who walk by them unaware.

The artist purposely ran this exhibit during an election year to help encourage voters to think about hunger and how the government can address it. On the closing day of the exhibit, just days after the outcome of the 2016 election, the artist shares her final thoughts on the work. 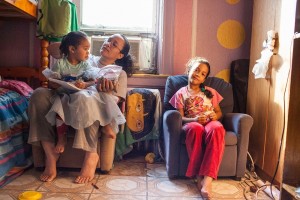 How did you first get involved with the Food Bank for New York City to do this photo series?

It started when someone who worked at the Food Bank for New York City saw an exhibit I had done at the New York Public Library called Where The Books Go showing how peoples’ library experience translated into the fabric of the community.

I guess someone from the Food Bank saw that and then they asked me, “What could you do for us?” I initially thought that I wasn’t going to be able to do a whole lot for them, but then it grew so much.

You mentioned that you spent three years photographing 40 pantries across all five boroughs of New York City. How many hours would you say you spent on this project overall?

There were times where I would shoot three or four times a week, and that would usually be for several hours. Plus, even if I didn’t shoot, I would always be hanging around.

When I started, I honestly didn’t even know what food pantries were. I was thinking about it as I think many New Yorkers think about it — like soup kitchens, and feeding the homeless. I was not thinking of it in terms of a middle class or working class issue.

What was your photojournalistic process like? It seems like there was a lot of trust building you had to do with people.

The people at the Food Bank of New York City gave me a list of their pantries and told me ‘You can go wherever you want.’ But what I found was that my subjects, Otto and Swami and all of these other guys, they educated me and helped me to really understand what was going on. Some of the times, they would introduce me to people. Other times, I’d meet people and they’d back me up, or I’d come to work in the morning and they’d introduce me.

Also, I’m really careful. If you don’t want your picture taken, just tell me. Turn away, look away, tell me to go away. I would say that one of the reasons why I kept going for three years is because I started to show the diversity on the line. But actually getting people who reflected the diversity, to agree to work with me, was hard. Everybody said no. Like, only 13 people said yes in three years. It took a long time for people to agree. 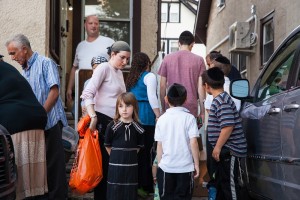 Why do you think there were so many negative responses?

Stigma is huge. The shame is enormous. People on the lines spanned every demographic, every political group, every race, every culture. College students, grad students, people who were artists — they didn’t want to be a part of it.

And then a lot of people would say yes to me, like three times, and then it would never happen. Sometimes, I would show up at a person’s house to photograph them and they just weren’t there.

I’ll also tell you, there are a lot of Trump supporters up on that wall. I found it further evidence against the charge that these people are just standing around for free food. Nobody would stand in these lines if they didn’t have to. 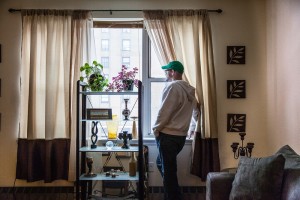 How did you decide which photos you were going to feature in the exhibit?

I worked with a curator to help me pick the final images. And then at the end of it, there were certain aspects of the story we wanted to tell. We were trying to select images that the greatest number of people could relate to.

For example, Patrick here has AIDS and he was a veteran living in Staten Island. He was in a situation where he couldn’t afford transportation. He couldn’t afford to go out, he couldn’t afford to see his friends. This photo was actually meant to be a test shot, but I think it really shows the sort of isolation he was feeling at the time. And those were the kinds of stories I wanted to tell.

What are your future plans for the exhibit or other photo work? Is Hidden in Plain Sight going to show anywhere else?

I don’t know yet. I’d love to keep this going and have more people see the exhibit, especially with what’s going on after the election. It’s important to know that a lot of these places are not just food pantries. They’re supportive centers for people in need in so many ways.

Click here to check out more photographs from Hidden in Plain Sight: Portraits of Hunger in NYC on Joey O’Loughlin’s website.