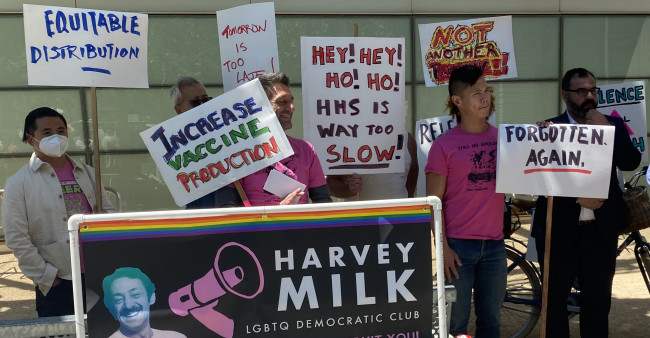 Clinics that treat treat sexually transmitted infections are on the front lines of the rapidly growing monkeypox outbreak.

Clinics that treat sexually transmitted diseases—already struggling to contain an explosive increase in infections such as syphilis and gonorrhea—now find themselves on the front lines in the nation’s fight to control the rapidly growing monkeypox outbreak.

After decades of underfunding and 2½ years into a pandemic that severely disrupted care, clinic staffers and public health officials say the clinics are ill-equipped for yet another epidemic.

“America does not have what it needs to adequately and totally fight monkeypox,” said David Harvey, executive director of the National Coalition of STD Directors. “We are already stretched to capacity.”

Monkeypox—a cousin of smallpox—is not technically considered a sexually transmitted infection. But it spreads through close contact and is now being transmitted largely through networks of men who have sex with men.

Although most people with monkeypox recover on their own in two to four weeks, about 10% need hospital care, said Dr. Peter Hotez, dean of the National School of Tropical Medicine at the Baylor College of Medicine.

The degree of complications from monkeypox “has been much higher than any of us expected,” said Dr. Mary Foote, an infectious diseases expert at the New York City Department of Health and Mental Hygiene, who spoke July 14 during a webinar presented by the Infectious Diseases Society of America. In addition to severe pain, some people with monkeypox are at risk of permanent scarring. Foote said the pain can be excruciating, making it difficult for patients to swallow, urinate, or have bowel movements.

Sexual health clinics have been stretched so thin that many lack the staff to perform such basic duties as contacting and treating the partners of infected patients.

These clinics are some of the most neglected safety nets of the nation’s tattered public health system, which has less authority and flexibility to fight outbreaks today than before the covid-19 pandemic.

With 1,971 monkeypox cases reported since May in the United States—and about 13,340 around the world—doctors warn the epidemic may have grown too large and diffuse for them to contain.

Dr. Shira Heisler, medical director of the Detroit Public Health STD Clinic, said she’s proud of the quality of care she provides but simply doesn’t have time to see every patient who needs care. “We just don’t have the bodies,” she said. “It’s a total infrastructure collapse.”

Funding from the Centers for Disease Control and Prevention to prevent sexually transmitted infections has fallen by almost 10% since 2003, to $152.5 million this year, even though syphilis cases alone have more than quadrupled in that time. Taking inflation into account, that funding has fallen 41% since 2003, according to an analysis by the National Coalition of STD Directors.

Meanwhile, hundreds of local and state health professionals who trace the origins, track the trajectory, and stop the spread of cases reported by sexual health clinics have quit or been replaced since the pandemic began. Some left due to burnout, and others were driven from their jobs by critics protesting unpopular policies on masks and lockdowns. Some federal grants to strengthen the public health workforce are just now being rolled out.

Data reporting systems have not been updated during the pandemic, in spite of glaring inadequacies it helped reveal. Public health workers still use fax machines to deal with monkeypox cases in Florida and Missouri, public health officials told KHN.

“Even with the advantages of having a test and a vaccine, we still haven’t invested enough in the public health system in order for us to respond quickly enough,” said Dr. Tao Kwan-Gett, Washington state’s chief science officer. Many people “will tell you we have the best health care system in the world. But I think the covid-19 pandemic, as well as [the monkeypox] outbreak, shows that the system is broken and needs fixing.”

The White House is distributing hundreds of thousands of monkeypox vaccines now, releasing additional doses as they become available, for a total of nearly 7 million doses within the next year.

But Hotez said those vaccine shipments “may not be sufficient.”

Some cities are running out of doses shortly after opening their doors. In New York City, where monkeypox cases have tripled in the past week, the vaccine rollout has been plagued by technical glitches; the vaccine website has crashed at least twice. San Francisco officials said their city is also running low on vaccine supply.

Monkeypox vaccines can effectively prevent infection in people before they’re exposed to the virus.

Experts believe vaccines may help prevent infection after exposure, as well. But they’re most effective if administered within four days after close contact with a monkeypox patient, said Dr. Trini Mathew, medical director of antimicrobial stewardship and infection prevention and control at Beaumont Hospital in Taylor, Michigan. Vaccines given between four and 14 days of exposure may reduce symptoms but not prevent the disease.

Yet the battered public health system isn’t built for speed.

Although monkeypox tests have become easier to access in recent days, some public health systems don’t have enough staff to quickly locate and test patients’ partners. And because most health professionals have never managed a case of monkeypox, patients often must make multiple visits before being accurately diagnosed.

Decades of budget cuts have led many sexual health clinics to limit their hours of operation, making it harder for patients to receive care.

Public health departments have lost key members of their teams in recent years, including highly trained nurses and outreach specialists.

A 2020 KHN-AP analysis found that at least 38,000 state and local public health jobs have disappeared since the 2008 recession, leaving a tattered workforce to confront America’s public health needs — and that was before covid hit. That investigation found only 28% of local public health departments have statisticians or epidemiologists, the disease detectives who investigate the source and trajectory of infectious outbreaks. More than 2.4 million sexually transmitted infections were reported in 2020, according to the CDC.

“I don’t think any health department in America could handle all the STIs that get reported to them,” Kiernan said.

The federal government has spent billions of dollars fighting the covid pandemic, and some covid-related grants will be used to expand the overall public health workforce.

But the CDC and Congress often designate funds for specific purposes, said Lori Tremmel Freeman, head of the National Association of County and City Health Officials. “If you have somebody working on covid, you can’t just reassign them to monkeypox using the same bucket of money,” Freeman said.

And in some states, that money hasn’t yet reached public health departments or sexual health clinics.

The CDC gave Michigan millions of dollars to strengthen its public health workforce, but the Michigan Legislature appropriated only a portion of the money. Heisler wrote to multiple state legislators begging them to free up the remaining funds. None replied to her.

Public health workers say they hope monkeypox will be a wake-up call.

“I hope this drives home the need for more investing in public health infrastructure,” said Kwan-Gett of the Washington state health department, “because without that investment, this is just going to happen again and again.”

This story was published by Kaiser Health News on July 19, 2022. It is republished with permission.