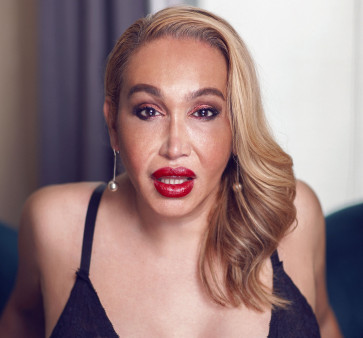 As we get older, life can get busy, both professionally and personally. As a result, sex often takes a back seat. That doesn’t mean, however, that our sexual health needs disappear or stop evolving.

Take Hollie Harper and Cecilia Gentili, both from New York City. Harper recently turned 50, and Gentili will reach that milestone next year. Despite all their obligations, sex is very much still in the mix.

Harper, an African-American stand-up comedian in Brooklyn, is a married mother of two children, ages 14 and 8. For her and her husband, sex was a big part of their life early on. “We’ve always been very easily attracted to each other and had an effortless sex life—probably two to four times a week.”

Having kids cut into that frequency. “I’d be caring for my babies all day, tired and exhausted, and I just didn’t want anyone touching me,” she admits. “I wanted to be left alone. But luckily, the base of our marriage is a very strong friendship, so we found our way through it.”

How? By scheduling dates! “To be intimate, we had to give the kids to family for a night.” Or, she says, they would each take one of the kids to school and then meet back home for sexy time before Harper’s husband had to get ready for work.

Midlife has presented different opportunities for Gentili. She keeps busy as a full-time transgender advocate and consultant. For 30 years prior, she was a sex worker. Many trans people, who find that discrimination shuts them out of the traditional job and housing market, share a similar story. As trans rights and awareness have expanded, so, too, have employment opportunities.

The sexual challenge in her post–sex work life, says Gentili, has been discovering what she likes—not what she’s expected to do.

“I’ve learned the ability to stop and be truthful to myself about what makes me happy and gives me pleasure,” she says. “When sex is your job, it gets very blurry, but getting clarity on that has been really empowering for my sexual health and my sexuality in general.”

In different ways, both Harper and Gentili have taken proactive steps toward caring for not just their sexual health but their own happiness. That’s important, says Asa Radix, MD, PhD, senior director of research and education at New York City’s Callen-Lorde Community Health Center and vice chair of the board of the American Sexual Health Association (ASHA).

ASHA’s website, ashasexualhealth.org, is a wonderful resource for all kinds of sexual health information, including how to find a caring sexual health provider near you.

“Sexual health is all about being able to embrace and enjoy your sexuality throughout your life, because it’s an important part of life,” says Radix. “Often, people think of it as being only about getting treated for sexually transmitted infections (STIs), but it’s also about both your emotional and mental well-being in relation to sexuality.”

“It’s useful to write out a list of questions or concerns beforehand,” he says. “You’re less likely to forget or lose your nerve that way.”

Ideally, says Radix, a provider will gently bring up sexual health as a part of your overall health, but not all providers have yet been trained to do so—something that organizations like ASHA are trying to change. If your provider isn’t open to hearing your concerns around sex, he says, you may want to look elsewhere.

You may want to discuss with your provider regularly getting tested for STIs, such as HIV, syphilis, gonorrhea and chlamydia, even if you believe you’re in a monogamous relationship—you don’t necessarily know your partner’s entire sexual history.

You may want to discuss preventive options, such as condoms, going on pre-exposure prophylaxis (PrEP) for HIV or getting vaccinated for hepatitis A or B or for human papillomavirus (HPV), some strains of which are known to cause various types of cancer.

You may also want to discuss an inability to feel sexually aroused, maintain an erection or have an orgasm. A good provider can help you determine whether such problems are related to side effects from medications you are taking, low testosterone or depression, anxiety or other mental health conditions.

“Everyone’s story is unique,” says Radix, “so don’t be embarrassed, because sex is meant to be enjoyed.”

That’s something Gentili has been discovering. One thing she has realized, she says, is that she enjoys sex with people of all sexual identities and gender expressions—not just cisgender men, who were her primary clients when she was a sex worker.

“Most of my clients wanted to engage with a woman with a penis but were not able to fully embrace that in their lives, so they could only do it secretly, through a sex worker. But even when I was just having sex for fun, I was still engaging with dudes,” she says. “I never paid attention to how much I was attracted to other kinds of people, but coming to realize since then that I embody the full definition of pansexualism has been really refreshing.”

Harper, too, is staying open and resourceful when it comes to intimate time with her husband. Now, with the whole family stuck at home during COVID-19, she says she’s lucky the kids are old enough to send them out on errands. “If we need more time, I’ll text them to go get something else that I forgot,” she laughs. “They’ve become house cats, and my husband and I need our time together!”

And once they are cuddled up, she says, they connect—despite the midlife pressures of keeping it all together in a new pandemic. “We just sit in the dark and talk for a while,” she says. “Just decompress and lie there together.”

But fear not, she says. “It always leads to sex!”

Click here to read 10 tips for improving your sexual health.