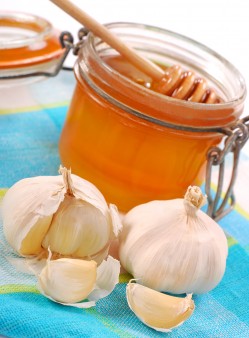 Natural healing—the art of curandero or curanderismo (taken from the Spanish word “curar,” or to cure)—isn’t necessarily a thing of the past. Many Latinos continue to drink teas of barks and berries for internal ailments, use plant leaves and roots for external injuries, and take part in healing rituals to rid the soul of dangerous spirits.

The medical community has often been skeptical about folk healing. However, recent studies have begun to show a scientific basis behind many traditional curandero practices. Below is an overview of popular ingredients in natural Latino medicine, including why they work and how to use them safely.


Garlic has traditionally been used in Latino curandero practices to protect the soul from enemies, negative energy and lurking evil. It’s common to see cloves of garlic hung over doorways in Latino households, eaten raw for protection from internal and external ailments and even burned regularly in homes to keep negative spirits away.

Modern medicine seems to back up the idea that garlic can be a fierce protector of our health. Several large-scale studies have proven that the herb is an effective cure for several conditions linked to the blood system and heart, including atherosclerosis (the hardening of the arteries), high cholesterol, heart attack and hypertension.

In addition, one Chinese study found that people who eat raw garlic at least twice a week have a 44 percent lower risk of developing lung cancer. Another study from the Medical University of South Carolina discovered that the organosulfur compounds (i.e., organic products that contain sulfur) found in natural garlic successfully destroy certain brain tumor cells. And recently, diallyl sulfide, a compound in garlic, was found to be 100 times better than two popular antibiotics in fighting certain bacteria that commonly cause intestinal infections. Talk about protection from negativity!

The aloe vera plant produces two substances: a gel, found in the middle of the plant leaves, and latex, a yellowish substance found just under the plant’s skin. Latino healers have traditionally used both substances to treat a wide range of both external and internal ailments.

Modern medicine has shown that the gel of the aloe vera plant is a safe, natural remedy for many skin conditions, including burns, sunburns, cold sores and psoriasis, because compounds in the plant improve blood circulation in the affected area and prevent cell death around a wound.

Aloe latex has also been traditionally used as a powerful antidote to constipation when taken by mouth. Although it is highly effective, modern medicine asserts that eating this part of the plant is likely unsafe, especially at high doses. Some studies show eating aloe latex may cause cancer and also that the substance is very hard on the kidneys. Eating too much could lead to serious kidney disease and even death.

Latino folk healers have generally used the dried leaves and oil from the Eucalypto tree mostly for respiratory ailments. The plant is used in order to loosen coughs and decrease the symptoms of colds, fevers and even asthma, and is also thought to naturally boost immunity.

The plant is shown to reduce both the pain and swelling of mucous membranes in the respiratory tract. It can be a safe natural alternative for treating coughs, bronchitis, sinus pain and certain symptoms associated with asthma and chronic obstructive pulmonary disease (COPD). In fact, eucalyptus is one of the main ingredients found in Vicks VapoRub.

When used topically, eucalyptus oil is proved to decrease swelling from joint pain, genital herpes and acne, and also is a powerful insect repellant. In dentistry, the plant’s oil is used as a sealer and solvent for root canal fillings because of its antibacterial qualities.

However, modern medicine has one major warning: The plant’s oil should never be taken by mouth or applied to the skin at full strength. If it is not diluted, it could very severely poison the person taking it.

If you come down with a cold in Spain or Latin America, your host will most likely serve you up a pile of garlic and a hot cup of lemon honey tea. Dubbed the “Spanish cure,” honey has been a cure for coughs for generations. It seems as though modern medicine has finally caught up.

A recent research study showed that children who were given a dose of honey coughed less and slept better than those who took cough medicine with dextromethorphan (DM), the most-common drug in over-the-counter cough medicines like Robitussin or Delsym. What’s more, the kids who took honey instead of the over-the-counter treatments had none of the negative side effects associated with the drugs, such as dizziness or sleepiness.

The reason behind its effectiveness is two-pronged: First, the stickiness and viscosity of honey act as a great soother for irritated mucous membranes, making coughing less likely. Second, honey contains a bee-produced enzyme that causes nectar to produce hydrogen peroxide, an antibacterial agent that can combat certain respiratory illnesses.

But be careful. Doctors advise parents never to give children younger than 1 year old honey under any circumstances because of the risk of botulism, or small sores that develop in a child’s mouth because of honey’s natural ingredients. As children get older, their immune systems can fight off the potential infection.

Rosy periwinkle is a perennial shrub with white pinkish flowers that grows all around the world, from Africa to the North America. This plant has been used as treatment in poultices and teas for a wide range of illnesses in the Latin world, from an anti-diabetic drug in Jamaica, to an eyewash in Cuba, and an oral gargle for easing the pain of sore throats and chest pains throughout Central America.

In the mid-1950s, scientists discovered that the plant contains the vinca alkaloids vincristine and vinblastine, which are capable of inhibiting the growth of tumors in the body. The plant’s anti-cancer properties may play a role in treating leukemia, testicular cancer and even Hodgkin’s disease, a malignant cancer affecting the lymphatic system.

Rosy periwinkle also has been found to help treat high blood pressure and blood sugar symptoms in patients, although scientists say more research needs to be done on why. Juice from the crushed plant also is shown to decrease pain caused by wasp stings.

The plant does have some side effects, which are, interestingly, similar to that of modern chemotherapy. Patients taking rosy periwinkle compounds for cancer treatment should look out for nausea and hair loss while taking the supplement.

As far back as the 1600s, native Peruvians used the bark of the chinchona tree, the only natural source for quinine, as a potent treatment for malaria. The tree was then brought to Europe by the Jesuits and was considered up until the mid-1940s as the most effective preventative treatment and cure for the disease.

Quinine is a true example of how allopathic medicine—or traditional, pharmaceutical-based Western medicine—can benefit from the art of natural healing. A synthetic version of the plant is now available with a prescription as well as over the counter in most U.S. pharmacies for a wide range of ailments. Quinine is used to treat lupus and arthritis, and it still remains a treatment for malaria, especially in the developing world due to its low cost. It also is frequently prescribed as an off-label cure for nocturnal leg cramps.

Used in natural healing, the plant serves as an anti-fever agent, a digestive stimulant or as an appetite stimulant. Modern medicine also lauds quinine as a powerful anesthetic, antiseptic, antiparasitic and fungicide.