Black and Latino People Have a Higher Lifetime Risk of HIV

Nine out of the 10 areas with the highest likelihood of being diagnosed with HIV are located in the South.

The projected lifetime risk of acquiring HIV is dramatically higher for Black men and women compared with other racial and ethnic groups, according to new data presented at the Conference on Retroviruses and Opportunistic Infections 2022 (CROI 2022). Latinos and Native Americans also have a disproportionately high risk. While the overall lifetime risk has decreased over the past decade, all groups are not benefitting equally.

The study, from the Centers for Disease Control and Prevention (CDC), didn’t break down the data by route of HIV acquisition (for example, men who have sex with men or people who inject drugs) or for transgender people, but it offers a big picture of HIV disparities in the United States.

CDC epidemiologist Sonia Singh, PhD, and colleagues took the number of new HIV diagnoses in December 2020 from the National HIV Surveillance System and combined that with data on non-HIV-related deaths from the National Center for Health Statistics and population size and demographic data from the U.S. Census to estimate how likely it is that people in different racial/ethnic groups, and people in each state, would acquire HIV. This is a common approach for cancer epidemiology but has been used less often for HIV, Singh noted. 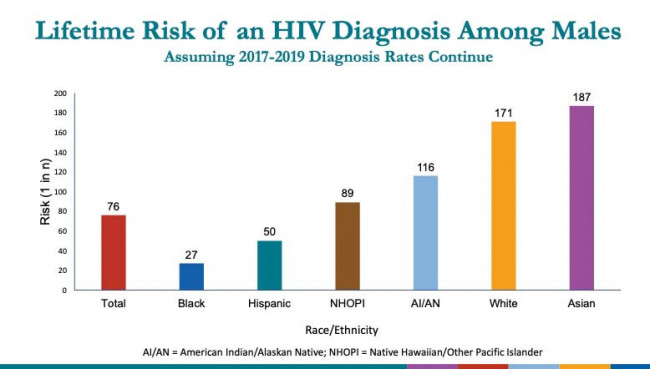 If the diagnosis rates from 2017 to 2019 remain the same going forward, the researchers project that 1 in 76 men could acquire HIV in their lifetime. But this varied greatly across groups. One in 27 Black men and 1 in 50 Latino men could be expected to acquire HIV, compared with 1 in 171 white men and 1 in 187 Asian men. This means Black men are about six times more likely than white men ever to be diagnosed with HIV. 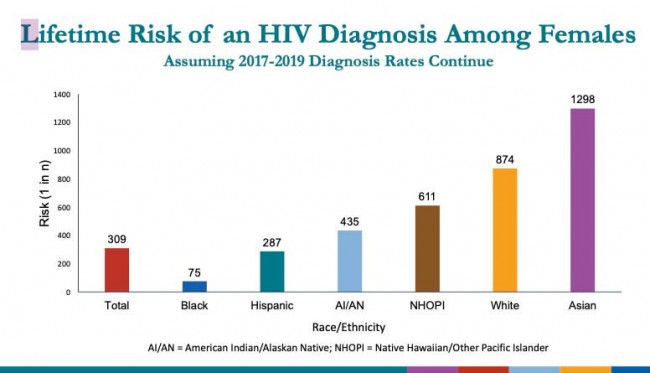 A similar pattern was seen for women. While 1 in 309 women overall are projected to acquire HIV in their lifetime, this rose to 1 in 75 Black women and 1 in 287 Latina women. The projected rates were 1 in 874 for white women and 1 in 1,298 for Asian women. 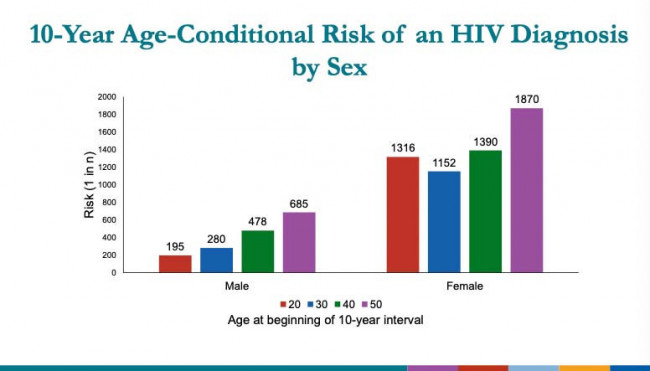 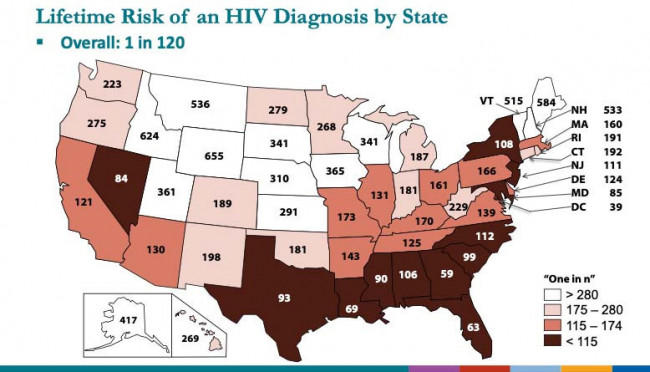 There were also some notable geographic disparities. States with the highest lifetime risk (shown in dark brown on the map above), matched fairly closely with those the CDC is targeting as part of its Ending the HIV Epidemic initiative. People in Washington, DC, have the highest lifetime risk, at 1 in 39, followed by Georgia (1 in 59), Florida (1 in 63 people) and Louisiana (1 in 69). In fact, Singh noted, 9 out of the 10 areas with the highest risk were in located the South. The states with the lowest lifetime risk of acquiring HIV were Wyoming (1 in 655), Idaho (1 in 624), Maine (1 in 584) and Montana (1 in 536).

But the data did not dive into which specific communities within states have the highest lifetime risk. Other recent data from the CDC suggest that Black people are more likely to acquire HIV if they live in neighborhoods that are highly vulnerable due to inadequate infrastructure and resources.

Overall, the lifetime risk of an HIV diagnosis has decreased by 11% since an earlier analysis in 2010 to 2014—from 1 in 106 to 1 in 120—but due to historic barriers,  this decrease was not seen across all races and ethnicities, the researchers concluded.

Singh suggested that these lifetime estimates could help people understand their individual risk for HIV and could guide allocation of resources through the Ending the HIV Epidemic initiative.

“Every person who could benefit needs to have access to the highly effective prevention tools that are available. To end the HIV epidemic, we need to provide equitable access to people who could most benefit,” Singh said. “We’re seeing that prevention is improving, but there are certain groups that have stayed the same and we should continue to focus those groups.”

Click here to learn about how to protect yourself from HIV.