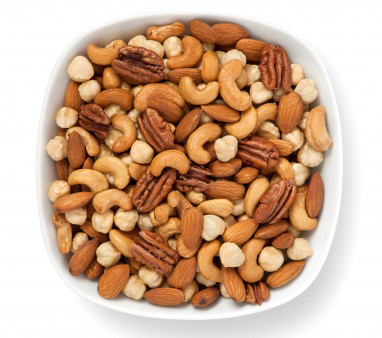 The count, vitality, motility and shape of sperm improved when men added a mix of almonds, hazelnuts and walnuts to their daily diets.

As Real Health previously reported, men in Western countries have experienced a significant decline in sperm count for some time. But now, doctors suggest that fertile males who incorporate nuts into their everyday diet may see a boost in the quality and functionality of their sperm, reports the European Society of Human Reproduction and Embryology (ESHRE).

For the 14-week study, scientists randomly divided 119 healthy young men ages 18 to 35 into two groups. Researchers asked those in the experimental faction to add 60 grams of mixed nuts (almonds, hazelnuts and walnuts) to their daily diet, while individuals in the control subset made no dietary changes.

In addition, researchers noted that men in the group who consumed nuts on a regular basis experienced less fragmented DNA. (DNA fragmentation is associated with male infertility.)

But Salas-Huetos stressed that study subjects were all healthy and fertile men, so these findings may not apply to the general population.

Additionally, this means that it’s also too early to suggest that men who want to conceive children—either naturally or through in vitro fertilization— should include nuts in their normal diet, he cautioned.

But evidence is accumulating that lifestyle changes such as following a wholesome eating plan might help conception. “And of course, nuts are a key component of a Mediterranean healthy diet,” Salas-Huetos said.

Click here to learn how nuts can reduce the risk of cardiovascular disease.