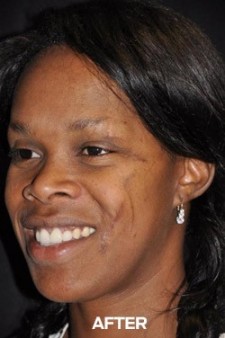 After a near-fatal car accident caused Lisa Jackson to suffer multiple lacerations to her face, the fitness model was left with a large facial scar. She also lost an eye, which had to be replaced with a prosthetic. “I was devastated,” Jackson says. “I had always concealed the scar with hairstyles, but I was at a point where I wanted to have work done to have the scar look better so I could do more than fitness modeling. I wanted to expand my career to do other things, such as commercials.”

That’s when Jackson reached out to Brent Moelleken, MD, a board-certified plastic surgeon and board-certified reconstructive surgeon who is in private practice in Beverly Hills and Santa Barbara, California. Moelleken agreed to perform Jackson’s surgery through his About Face Foundation, a nonprofit corporation he founded to perform facial restorations without charge. For Jackson’s procedure, Moelleken used a trademarked technique he created called LiveFill.

The technique entails taking strips of a patient’s tissue, including fascia (the lining of the muscle) and fat, and placing them into areas where tissue is lost from an injury. “Lisa managed to make a living by being creative with her hair,” Moelleken says. “But she had literally lost chunks of tissue underneath the skin. It wasn’t enough just to improve the appearance of her scars [a surgery called scar revision] we had to replace the lost tissues. We removed her old scar tissue, replaced the lost tissue with LiveFill, and sewed up the tissue again,” Moelleken explains. “That gave her a much better appearance three-dimensionally than she would have had with just scar revision alone.”

For surgeries of this kind, Moelleken prefers LiveFill because the procedure uses living fat harvested from a patient’s own body. Moelleken fashions the tissue into very thin grafts or strips resembling strings of pearls that contain structural integrity and intact blood vessels that fit into a pocket he creates under the skin via a small incision.


Once the LiveFill grafts are placed, the blood supply from the patient grows into them, and they become a permanent part of the patient. “Within 72 hours, the body knows the strips are alive and that they belong to the patient,” Moelleken says. This means since the tissue comes from the patient’s own body, there is no danger of disease transmission, allergic reaction, autoimmune diseases or immunologic rejection.

“I was very confident in Dr. Moelleken,” Jackson says. “I knew I was in good hands, and I was actually quite excited to be able to have him perform the surgery on me so I could come out looking much better.”

Jackson’s confidence in Moelleken also came from the success the celebrated doctor has in using his LiveFill technique to minimize keloid scars on African Americans and other people of color. “I was excited to see the outcome when it was finally finished,” she says.

“African-American patients often present unique wound challenges,” Moelleken explains. “We have to be very careful about African-American skin because it doesn’t always heal well and sometimes patients will keloid. That’s why we always want to be cautious and do the surgeries in such a way that people can heal properly.”

Jackson underwent one surgery, followed by a maintenance period. “There’s some creams and stuff I have to use and make sure the sutures are taken care of properly,” she says. “The healing is still going on now.”

The recovery period after a LiveFill surgery is “quite easy,” Moelleken says. “But therein lies the trap, because people think that they feel great and they look pretty good, so why don’t they just throw in a little exercise because the doctor will never know.”

But Moelleken cautions his patients not to engage in exercise too early, because the body needs to heal. “The blood supply needs to grow into the LiveFill, and if it doesn’t have enough of a chance to do that, the LiveFill will literally die.”

What’s more, smoking is also an absolute no-no. “Smoking constricts the blood vessels, and not enough blood will get to the LiveFill and it will die,” he says. “And that includes passive smoking [a.k.a. secondhand smoke].”

Jackson follows doctor’s orders and makes sure she’s not stressing herself or engaging in activities that will interfere with the technique’s goal of natural healing.

“I look forward to pursuing my career,” she says. “I just feel that much more confident facing people and talking to them. I pursued this surgery because I really trusted Dr. Moelleken. I also felt that the procedure would help empower me so I could go out and do the things I wanted to do. This surgery helped me achieve that.”

Jury Still Out on Long-Term Safety of Silicone Breast Implants