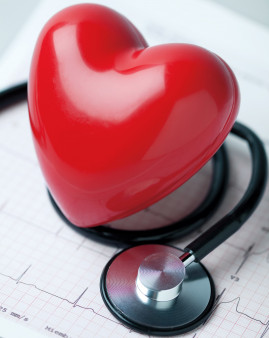 Individuals with a high body mass index (BMI) may have a higher risk of developing heart disease, according to a study published in the journal PLoS Medicine and reported by HealthDay News.

For the study, researchers looked at data from more than 75,000 people in Copenhagen, looking at individuals’ BMI and their history of heart disease. BMI is a measurement based on height and weight that is used to establish obesity. People with a BMI of 18.5 to 24.9 are considered normal weight while those with a BMI of 30 or more are obese. Those in between are deemed overweight.

Researchers found that people with a high BMI had a 26 percent increased risk of developing heart disease and that a BMI increase off our points increased the risk of heart disease by at least 52 percent.

“By doing epidemiological studies combined with genetic analysis, we have been able to show in a group of nearly 76,000 persons that a high BMI is enough in itself to damage the heart,” said Borge Nordestgaard,chief physician at Copenhagen University Hospital.

This is the first study to officially and directly link obesity to heart disease though researchers have long suspected it.

“Observational studies have suggested a relationship between heart disease and obesity, but that is not enough to prove a direct correlation,” Nordestgaard said. “Obese people can share characteristics or lifestyle traits that have an influence on both the heart and weight.”

Now doctors have a clear link. Currently, the U.S. Centers for Disease Control and Prevention describes obesity as a national epidemic, one that is a major contributor to some of the leading causes of death, including heart disease, stroke and diabetes. And Latinos are at high risk: In 2009, they were 1.2 times as likely to be obese than non-Latino whites.

Researchers are hoping that in light of the newest findings, doctors and patients can develop better health management plans, ones that include a goal of lowering patients’ BMIs.