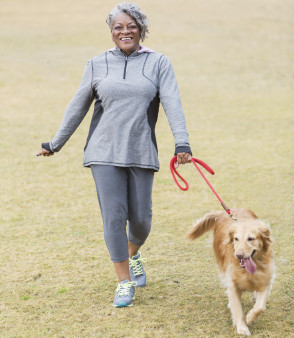 Step This Way and Slow Down Alzheimer’s Disease

Seniors, slip on your shoes because walking five miles a week may help slow the progression of cognitive illnesses such as Alzheimer’s disease, according to research presented at the Radiological Society of North America and reported by HealthDay News.

For the study, researchers analyzed the data from an ongoing 20-year study of the weekly walking patterns of 426adults. Of those participants (whose average age was between 78 and81), 127 were cognitively impaired. Specifically, 83 had mild cognitive impairment (MCI), and 44 had Alzheimer’s.

After 10 years of the study, all participants underwent 3-D MRI scans to assess brain volumes and mini-mental-state exams to measure their cognitive functions.

Researchers found, after accounting for age,gender, body-fat composition, head size and education, that more physically active individuals had a larger brain volume compared with less active people. (The greater the brain volume the lower the degree of brain cell death and the better the brain health.)

“Alzheimer’s is a devastating illness, and unfortunately, walking is not a cure,” said Cyrus Raji, PhD, from the University of Pittsburgh. “But walking can improve your brain’s resistance to the disease and reduce memory loss over time.”

But until the study’s findings are published in a peer-reviewed journal, scientists view them as preliminary.

In general, doctors recommend that people of all ages stay physically active. And although exercise is one way to fight Alzheimer’s, there are others.

Click here to find out how diet can help too.