Named after the activist and reality TV star from MTV’s The Real World who died 25 years ago of AIDS-related causes, the scholarships help support the education of youth dedicated to fighting the epidemic. The latest recipients represent nine different states. 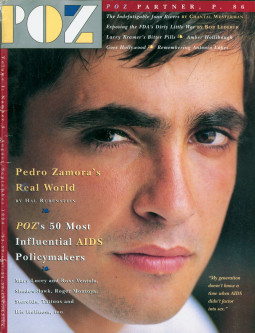 Pedro Zamora on the cover of POZ in 1994

According to a press release from the National AIDS Memorial, each recipient received a $5,000 scholarship thanks to individual donations and grants from pharmaceutical giant Gilead Sciences and financial services company Wells Fargo.

The scholarships were awarded during a ceremony December 1, World AIDS Day, at the National AIDS Memorial in San Francisco.

“We are pleased to see the continued growth of the Pedro Zamora Young Leaders Scholarship and how our support is helping shape the next generation of leaders who are actively engaged in AIDS-related work,” said John Cunningham, executive director of the National AIDS Memorial. “These students are pillars in their communities and their campus, each with their own stories and a passion for making an impact.”

Since the program launched in 2009, a total of $250,00 in scholarships has been awarded to nearly 70 students. The application for the next round of scholarships opens March 1. To learn more, visit AIDSMemorial.org or call 415-765-0497.

According to the press release, the latest scholarship recipients are:

Tranisha Arzah, a freshman at Seattle Central College in Seattle, Washington, is pursuing an associate’s degree within the community health and education track with an emphasis on equity and social justice. She plans to continue advocating on behalf of women and youth.

Kota Babcock, a freshman at Colorado State University in Denver, Colorado, is pursuing a degree in journalism to help work to preserve the history and legacy of those who fought and lost their lives to HIV/AIDS.

Mona Bandov, a freshman at University of California, Berkeley in Berkeley, California, plans to become a global health professional. Her goal is to work establishing accessible and free health clinics and to help provide medical care to marginalized communities in Southeast Asia.

Justin Bell, a junior at Georgia State University in Atlanta, Georgia, is studying political science and finance. He worked in Liberia as a volunteer with the United Methodist Church Mission Global Health Team, where he witnessed firsthand the impact of HIV/AIDS in the local community.

Asamia Diaby, a junior at City University of New York, Lehman in the Bronx, New York, is a housing advocate dedicated to protecting the rights of HIV-positive individuals. She believes that housing reform, income equality, safe injection facilities and health care for all are also critical in the fight against HIV.

Grace Gautereuax, a junior at Willamette University in Salem, Oregon, wants to use her education to turn the tide on abstinence-only education. She is dedicated to sexual health and justice.

Karlo Manzo-Arroyo, a freshman at the University of Illinois in Chicago, works in the Department of Public Health as a certified rapid HIV tester and counselor. He is pursuing a degree in accounting to work within his agency’s finance department and ensure continued funding for HIV programs.

Emily Nold, a freshman at the University of British Columbia in Vancouver, Canada, plans to study nonprofit administration and management.

Verenice Ortiz-Robles, a freshman at Central New Mexico Community College in Albuquerque, New Mexico, lost her father to HIV/AIDS. In his honor, she joined the International AIDS Society to help those impacted by HIV/AIDS and works to help translate material and presentations on safe sex.

Nicolas Rios, a freshman at George Washington University in Washington, DC, plans to study public health policy. In high school, he founded his school’s first Gender and Sexuality Alliance to educate and normalize discussions around sex and sexuality.